Queen Victoria and the Corset Era Painting by Tiago Azevedo 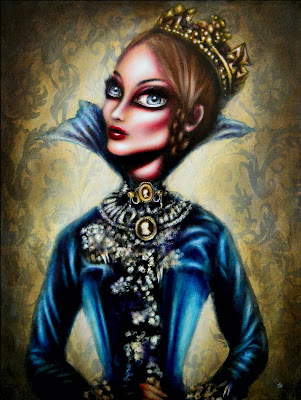 Queen and the Corset Era Painting by Tiago Azevedo

Here Queen is seen in an intimate and alluring pose, leaning against the viewer with her hair half unraveled from its fashionable knot. Depicting the costume with veracity and exuberance. Here, however, the focus is not only on fashion on fashion and the blue cinged detailed gown but also on her face and imposing Victorian expression done in a pop surrealist way.

The detail of ornaments like the crown and the jewelry, a pair of drop earrings, and a heart-shaped pendant on a gold chain. This pendant is the glass heart-shaped locket containing a lock of 's hair which the Queen wore 'day and night' before her marriage. It had been a gift from Queen Louise of the Belgians. Such a jewel would have been a touching symbol of the Queen's devotion to her husband.

was Queen of the United Kingdom of Great Britain and from 20 June 1837 until her death. She adopted the additional title of Empress of India on 1 May 1876. Known as the Victorian era, her reign of 63 years and seven months was longer than that of any of her predecessors.
Publicada por tgoazevedo à(s) 14:03