Queen Elizabeth I and the Divine Painting by Tiago Azevedo 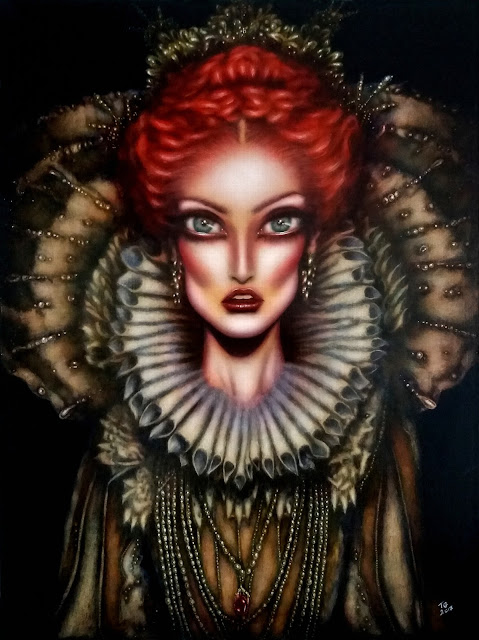 Queen Elizabeth I and the Divine Painting by TiagoAzevedo

In this painting done in a pop surrealist style, Her bejeweled red hair and smooth, pale complexion give no clue to her age, nor the scars from smallpox she had suffered at 29. Her upright posture, open arms, and clear gaze all speak of vitality and strength, as does the crown to her right.

's lavish dress is, however, replete with meaning. Black and white, in this instance more of a warm grey, were her preferred colors for several reasons. White symbolized purity and virtue, and was expensive to maintain; black spoke of humility, but also authority and power, and required rare dyes. But those colors were also an allusion to Cynthia, the goddess of the moon, black for night, white for the pearl-like moon, the subject of 's lengthy poem The Oceans Love to Cynthia, which celebrates the Queen as such a deity.

Then there are the abundant pearls, visual metaphors for the moon in themselves with which she is draped, also symbolic of her chastity. But pearls are not the only astronomical reference, there are numerous suns to signify power and enlightenment, embroidered in gold.