The Frog Princess and her Lover Painting by Tiago Azevedo 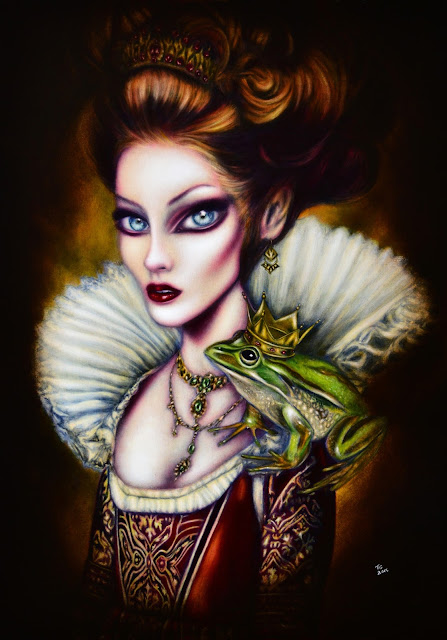 The Frog Princess and her Lover Painting by TiagoAzevedo

In the Frog Prince tale, a spoiled princess reluctantly befriends the Frog Prince, whom she met after dropping a gold ball into a pond and he retrieves it for her in exchange for her friendship. The Frog Prince magically transforms into a handsome prince after she kissed him.

In this pop surrealist painting, The Frog Princess is depicted at the center of the canvas as a stately beautiful girl, dressed in a beautiful gown and a regal pose with a slimy frog at her shoulder. Her hesitant expression and luxurious setting is meant to contrast with the not so attractive semblance  of the frog, who also sports a crown to indicate his claim to royalty.

Depicted at the time of her stay at the ball with the king. Right now she is demonstrating her amazing magic. The painted ornament on her collar and walls on the background, bordered by paintings aperture. The painting conveys the inspiration of folk art, all the beauty, and originality of the German fairytale people, telling the viewer about world magic.