Rapunzel in an Emancipated Dream Painting by Tiago Azevedo 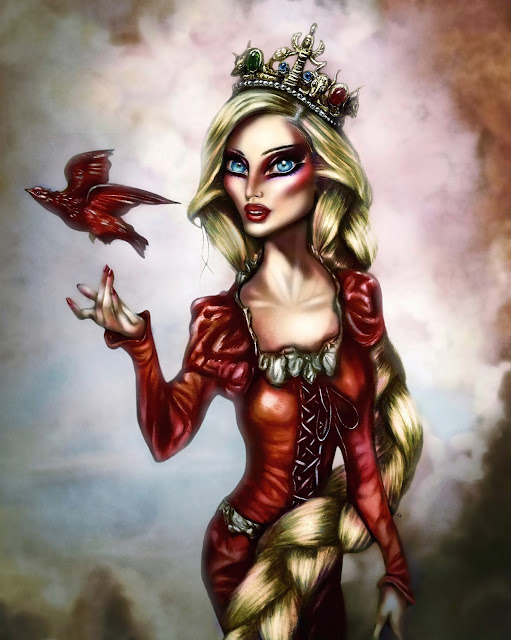 Rapunzel in an Emancipated Dream Painting by TiagoAzevedo

This Rapunzel painting is a re-interpretation of the traditional fairytale story from the Brothers Grimm and joins other great titles in the Fairytale series. It has the message of following your dream reflecting a work of fantasy and romance. The reason why Rapunzel was locked in the tower was that the witch doesn't want the world to see her. She had her evil plans as she wanted Rapunzel's beauty to be hers.

This portrayal of her in a pop surrealist manner captures the contrast between her deep confinement in the tower and the newfound endless freedom of the bird. The bird is painted in the same color of her dress as it were a part of her reaching out for that freedom and love she so desperately desires.

The sky defines the vignettes of the image as if it were a dream of hers. Despite her imprisonment, she still has the sensual royal pose that is inherent to her seductive personality. This proves that no matter what our situation is we are not defined by it, showing that we decide who we are and how we present ourselves to the World. Even the smallest light can fill a darkened room and love can indeed conquer all.