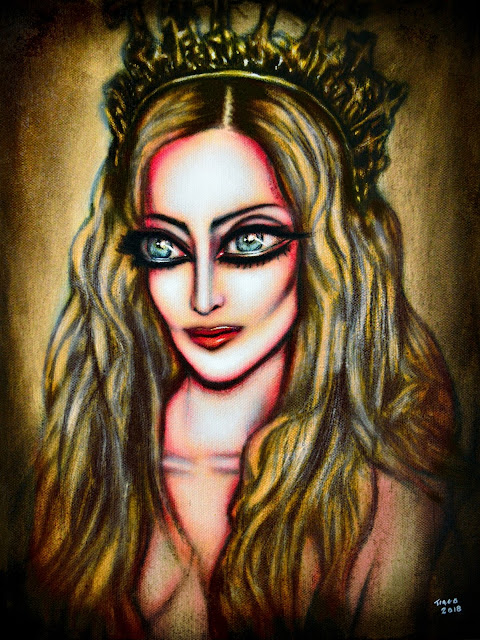 This painting aims to capture the ethereal beauty of the Queen of Pop in a way that also emphasizes her royalty as a cultural reference.

Here she has a sweet gage showing a serenity of someone knows how to achieve one's goals, she is crowned to consolidate her status and her whole figure and background are bathed in a golden light that contrasts with the blue of her exes and the deep red lips all depicted in a pop surrealist style.

Madonna, a singer, actress, dancer, and movie star  has sold over 300 million records worldwide, making her the best-selling female artist of all time, she often referred to as The Queen of Pop and has had a profound influence on music culture. She has pursued an independent approach to her career writing most of her songs and constantly redefining her image. For pushing the boundaries of taste and behavior, she has often courted controversy for upsetting religious and moral sensibilities. This shows how deep of an impact one person can have in the world by following their dreams.
Publicada por tgoazevedo à(s) 14:26