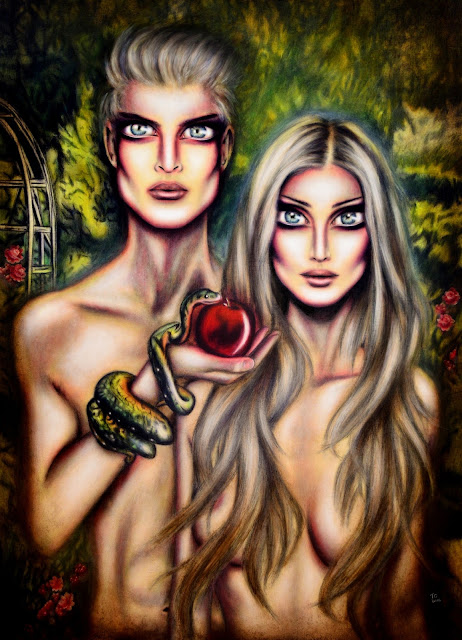 Adam and Eve in the Garden of Eden Painting by TiagoAzevedo

This painting is an interpretation of Genesis in which Eve is blamed for accepting the forbidden fruit, although the type of fruit is not stated, tradition opts for an apple and there is a reference to a second tree, a fig, whose leaves are used by Adam and Eve to cover their nakedness.

Here the idea of combining Adam next to standing Eve depicted in a pop surrealist style, and the figure of the snake from who Eve accepted the fruit. The snake traditionally associated with the devil, and the child-serpent who offers the apple. The darkening one of the protagonists´ faces, in this case, that of Eve, to create a more dramatic effect.

Adam appears as more upright, with his torso more twisted to one side and his right arm more angled. Eve is also slightly turned with the action of taking the apple was the result of temptation and not Eve´s own initiative whose consumption triggers the dramatic events that follow. The painting produces contradictory sensations. The coloring in the landscape contrasts with the color treatment of the figures.